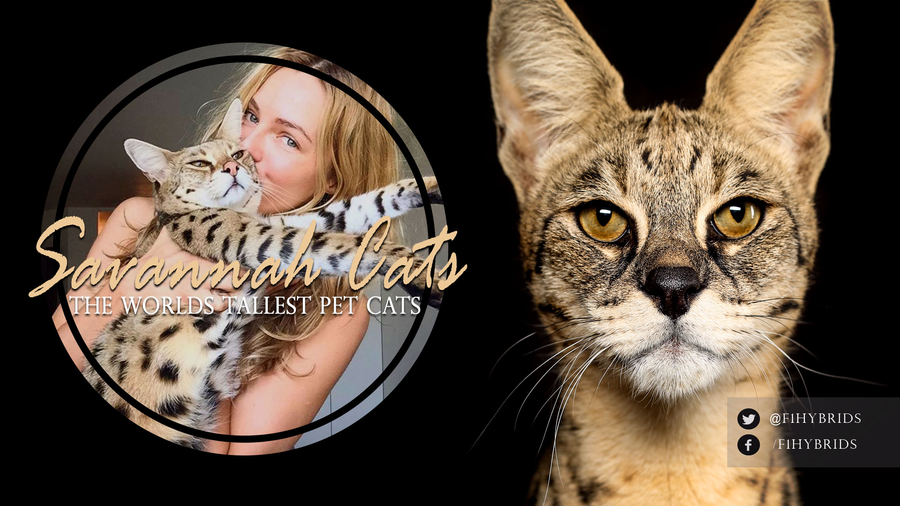 KNOXVILLE, TN, January 15, 2023 /24-7PressRelease/ — Should exotic hybrid cats be kept in houses? We talked to a cat breeder who says yes. With the release of the Tiger King series on Netflix consumers want to know more about the secretive underbelly of exotic pet ownership. Astonishing many homes across the entire world call an exotic or hybrid a “pet”. Not only are they expensive to purchase initially the after-care costs are pricy. The Savannah Cat is one of the controversial hybrid pet cats. Kittens for sale have a shocking price range of $2,000 to $50,000. In fact, the most expensive pet cat ever sold was $150,000, he was a Bengal Cat. Its controversy stems from the debate if a hybrid cat, a cross between a domestic cat to an exotic cat, should be kept as a house cat. We interviewed Savannah Cat Breeder Michelle Tuck to get an insight into the stunning and intimidating Savannah Cat Breed.

What started this strange career of breeding hybrid cats?

My fascination started a lot like yours, research into an interesting pet that led me to this leopard for my living room. I have been a TICA-registered Savannah Cat Breeder since 2006. I’ve produced some of the rarest pet cats, F1 Savannah Cats. Only a handful of breeders around the world can produce them. My savannah cats are sought after for their large size, spotted coats, and reliable temperaments. Making them highly intelligent, engaging, and devoted pets. I have sold to celebrities however my first priority is always to find the best home for the individual kitten.

Do people really pay up to $50,000 or is that a social media exaggeration?

It is not an exaggeration by any means but it’s not common. The expensive type Savannah Cats are extremely hard to produce, we are talking about only a handful produced around the world each year. Maybe 1% of the breed falls into that category. In fact, Savannah Cats don’t hold the record for the most expensive pet cat ever sold and many purebred cats have a standard cost similar to the more expensive Savannah Cats.

The most expensive cat ever sold was named Sarez Zeus and he sold for $150,000! Still a Guinness World Record to this day. He was extremely rare and valuable, as the only cat of his type to ever be produced in the world. He was an astonishing 10% domestic cat and 90% Asian Leopard Cat making him an F1 Bengal. He was sold in 2003 when they had just hit celebrity status. Internet usage had just started to take off and Celebrity pets were all the rage. This was indeed a once-in-a-lifetime cat.

Savannah Cats range from $2,000 all the way to $30,000! Savannah Cats followed the popularity of the Bengal Cat. Originally breeders didn’t believe a large cat like the Serval could mate with a domestic. Breeders found the Savannahs to be significantly larger in size and temperament was also more level in the cats closest to the Serval Cat. This meant you could own a larger more wild-looking cat with a more reliable temperament.

What domestic cats cost as much as a Savannah Cat?

Maine Coon Cats range from $2,000 all the way to $10,000! Recently the Maine Coon Breed has been divided into two distinct types, the European style, and the Traditional style. European Maine Coons have exaggerated features such as large muzzles and long ear tips giving a wild look with a gentle temperament. Coming in every color imaginable they are an ideal cat for any home. A Maine Coon Breeder is difficult to find especially if looking for the more exotic-looking expensive bloodlines. A Maine Coon named Altair holds the Guinness World Record of “Longest tail on a living cat” as of 2022.

Why would someone spend that much money on a pet?

Why do low-income households buy luxury items? For some consumers, a luxury good can go a long way in increasing self-esteem or providing a sense of belonging. Their lower position in the social hierarchy is more obvious and more consequential. Researchers at Yale have determined that this quest for authenticity develops early in childhood. The memory or feeling that comes from having purchased a genuine luxury good is part of the reason that we seek authenticity.

A sense of accomplishment is another reason why some people buy luxury goods. Consumers don’t behave rationally all of the time. The biggest takeaway is that these cat breeds are a luxury. Other options exist when obtaining a pet cat from low-cost to completely cost-free.

It does make you wonder…. does your neighbor have an exotic cat running around the house?